I recently saw a popup ad for a workshop called "From Burnout to Brilliant!" and I need to vent a bit.

If you write this or sell this, you are no healer and belong in the "You're not helping" file. As a recovering burnout, I can speak with some authority, burnouts need rest not more pressure to be "brilliant". How do you think they burned out in the first place, genius?!

While I'm on this theme, here are some other words that are off-limits when working with people who are burnt out:

It's the achieving, the accomplishing, the goals (which are just a "motivational" way of saying "duties"), the making it happen, and the can-doing that turn up the heat until you burn out.

Here are the words you should use if you want to remove yourself from the "You're not helping" file when working with people who have burnt out:

Honest to God! Does this woman look sane? 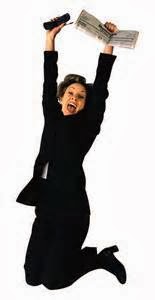 Posted by Unknown at 6:34 PM No comments:

This Medical Bill is Making Me Ill

So, I just wrote out a check for $105 to a medical center here in town. I went there for two visits back in March ... that's right ... March. To be fair, I received the first bill in September - however, that is a long time between bill and service.

When the bill came in September, I was so annoyed that I just couldn't bring myself to pay it. We've got to come up with a word for what that is.

Reason for late-pay: I had the money, I was just too disgusted to part with it.

Being a word person, I should be able to come up with something; I'm just a little too peeved for that right now. If you think of anything, please feel free to comment.

You'd think I had surgery ... or something removed. I want something that used to be inside me floating in a jar of formaldehyde for that money.

I have experienced something called edema, which is swelling, usually in the legs and ankles. I decided to finally go see what traditional medicine could do for it ... other than "elevate your legs."

I saw two rehab specialists who measured my legs for those compression bandages I would never wear and told them I would never wear. And a massage that helps drain fluid from the lymphatic system. I have had great results with regular massages, so I thought, "Why not get the massage designed to treat this condition?"

It must be so much better than a traditional massage by someone who fell ass-backwards into massage school and just rubs you around. Right?

Neither treatment did anything and I cannot believe that those two visits were billed at $1,698.00. People buy cars for that amount of money. Not great cars, but cars! An actual vehicular conveyance that is legal to drive could be purchased for the amount of money charged me for two rehab people who didn't even look me in the eye and seemed to have no idea what they were doing.

As I finished writing my check, I inevitably came to the Memo line. You know the line when you're supposed to write in what the check paid for. All I could think to write was, "Beats the shit out of me!" or "Damned if I know."

Something is really, really wrong with our healthcare system and it's not Obamacare. After the Republicans in Congress brought our country to the brink of default over the ACA - which is nothing more than a tax credit that enables the uninsured to buy health insurance at a cheaper rate - I can't help but look at this bill and recognize what a mess we're in. If it's this hard to even try to fix the system ... even a small part of the system ... God help us if we ever try to address the actual problem of medical billing.

The ACA doesn't even begin to address the problem of outrageous medical billing so thoroughly and astoundingly documented by Steven Brill in Time magazine back in May. His interviews on The Daily Show just skim the surface, but are still excellent.
http://www.thedailyshow.com/extended-interviews/424076/playlist_tds_extended_steven_brill/424058

Posted by Unknown at 8:25 AM No comments:

I was just invited to a potluck at a yoga center. Can you imagine an event involving food more fraught with stress? All the special diets -  vegan, all the various version of vegetarianism (now that's the way to alliterate!), gluten-free, GMO free, and on and on - some masquerading as eating disorders and some ... with a lot more discipline than me.

Anyway, even thinking of what I would bring fills me with so much fear and anxiety that I couldn't even imagine going. And - even if I somehow managed to figure out what to bring - I'd be too nervous to eat. All that judgement and "observing."

Every time I lifted my hand to my mouth, I'd just brace myself for the description of what is in my mouth. And, while I can't talk due to chewing, I'll hear a litany of either what I'm eating or shouldn't eat and how it would regulate or de-regulate or otherwise affect someone's bowel movements...just as I'm about to swallow.

Christ! I'd covertly slip something into my bra and run into the bathroom to eat it. Who am I kidding? I'm such a liar. I would eat a burrito in my car - in another parking lot - before walking in
Posted by Unknown at 3:37 PM No comments:

Look at these pictures of a study this young student did trying to grow a plant with microwaved vs non-microwaved water: http://usahitman.com/microwave-test/.

This sure makes me feel better about the "coffee incident" which, as you may know, was brought on by my refusal to use a microwave.

Yep, I might be a high-functioning spaz, but sometimes I get it right. 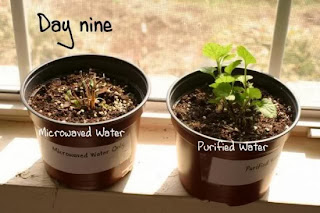 Now, in all fairness, it looks like a plant after nine days in my care ... even with purified water. However, the point about microwaves still stands.

Posted by Unknown at 9:55 AM No comments: